Banks are not the only ones offering acquisition financing. The pursuit of profit has led many other types of investors to provide privately held companies with financing. In this article, Valentum will clarify the different terms.

Acquisition financing from the bank can generally be thought of as a mortgages which are divided into first and second mortgages.

Loans using physical assets as collateral, such as buildings or machinery, instead of shares. The financier will be prioritised and have a right to the assets in the event of bankruptcy. The loan can amount to, but not exceed, the market value of the assets. Debt repayments and interest is paid continuously over the duration of the loan.

Normal loans using shares as collateral. The financier will be prioritised and have a right to the assets in the case of a credit event. The loan can be in the form of a bullet, meaning it does not require continuous debt repayments. Interest is usually paid continuously over the duration of the loan. Often there are different tranches of debt, where tranche A is more senior than tranche B and the terms and conditions of tranche B are less favourable.

Junior debt which comes after normal debt in the capital structure. The variations between different setups are greater, and consequently, there is also more flexibility when it comes to terms and conditions. Normally, the loans do not require debt repayments but use PIK (payment-in-kind) interest, which means that interest is added to the total debt and paid when the loan is due. Often there is also a financial instrument that allows the buying of shares under certain conditions. It gives the lender some upside potential, similar to a shareholder.

Debt investors are not licensed like banks, and instead of providing loans directly from their balance sheets, generally offer loans from capital sources, such as debt funds.

Mezzanine debt is that it is the most junior debt in the capital structure. It is often used to piece together the last elements of a financing package, and is consequently bound by strict terms and conditions and high interest rates. As a rule, the interest is always PIK and there are no continuous debt repayments. The interest rate can be as high as 20%, which might seem excessive, but in many cases it is lower than the required return of funds, which explains the demand.

A debt instrument that is issued by a company and can be traded at an exchange. It differs from other debt instruments in that the bondholder can transfer the bond freely to someone else. The bond has either a fixed or floating rate. If a company issues a bond it is usually to replace other loans. For instance, it is common to issue a bond to replace more expensive junior debts. 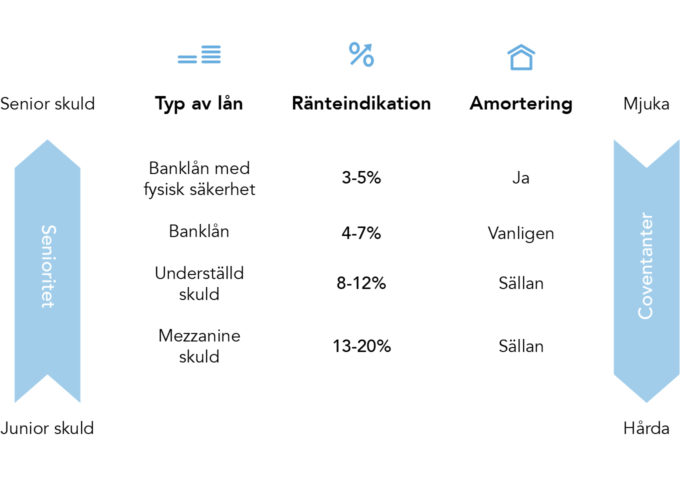 Seniority: The stakeholder that is paid first in the case of a credit event.

Interest: The annual cost of a loan.

Debt repayment: How and when a loan is paid back.

Conversion into shares: Junior debt sometimes has terms and conditions that allow for acquisition of shares.

Covenants: Boundries, often tied to various key ratios, within which a company must remain. For example, it can be stipulated that net debt cannot exceed operating profit by more than four times.