In 2018, a total of 1,114 M&A transactions were carried out in the Nordic countries, an increase of 64% since 2010, making it the eighth consecutive year of growth in the market.

73% of buyers were Nordic investors, in line with the previous eight years. Outside of the Nordic countries, American companies carried out the highest number of acquisitions, together constituting 6% of the market. They were followed by buyers from the UK, Germany, the Netherlands and France. Chinese investors have garnered much attention from media lately but made very few acquisitions in the Nordics—only seven companies were acquired by Chinese buyers in 2018.

The number of e-commerce transactions levelled out after having increased steadily by 12% per year since 2010. One highly-publicised e-commerce transaction involved the founder and owner of Care of Carl who sold a majority stake in the company. Valentum acted as advisor to Care of Carl throughout the whole process. When excluding e-commerce, the activity in the consumer sector decreased somewhat compared to the previous year; a total of 149 transactions were carried out in 2018 compared to 153 transactions in 2017. One notable transaction in this sector was the sale of IsaDora to the Nordic private equity firm Axcel, in which Valentum acted as the financial advisor of IsaDora.

The activity in the restaurant and entertainment sector continued to grow. A total of 40 transactions were carried out in 2018 compared to 30 in 2017. This sector has grown steadily at an annual rate of 18% per year since 2010. During the last year Pincho Nation, a chain of casual dining restaurants, was sold to Valedo Partners, and the gym chain STC was sold to Novax.

In total Valentum carried out 13 sell-side transactions in 2018, which made us the leading independent Swedish sell-side advisor. 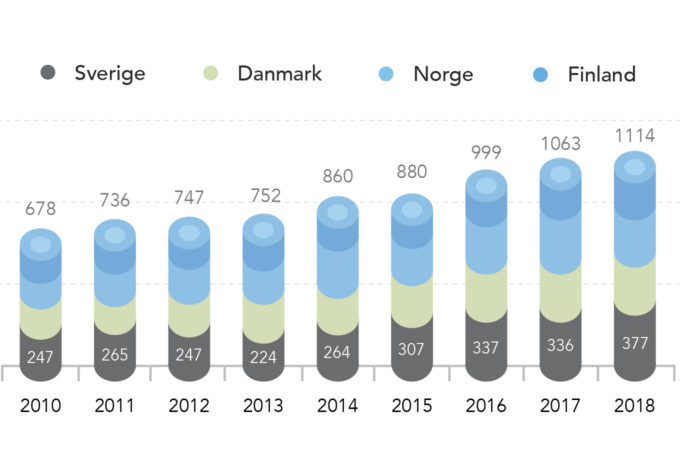