Less than four years ago, Fritidsfabriken, a homemade online shop went live. Behind the company were Pernilla and Niclas Nyrensten with a start-up capital of SEK 300,000. Success followed quickly and Valentum has now helped Fritidsfabriken in bringing in a partner new that will help Fritidsfabriken to continue its growth journey.

“It all started when we were selling outdoor clothes of other brands at outdoor fairs. I talked to girls who thought that the clothes fitted badly, as if they were just rebranded men’s clothes. And both women and men were reluctant to wear their clothes outdoors; one person feared getting blueberry stains on his SEK 2,000kr trousers”, says Pernilla Nyrensten CEO at Fritidsfabriken.

“There was clearly a gap in the market”

What was missing was well-fitting outdoor clothes for both men and women. Clothes that cost half of what the leading brands in Sweden are charging, while they retain the same high quality and functionality. Thus, RevolutionRace was born.

“We have created our own niche in the outdoor industry. We make outdoor clothes that work both in town and on top of Mount Kilimanjaro; leisure clothes flirting with street fashion. And since we only sell the clothes via our own online shop, we skip one, sometimes two, steps in the traditional supply chain. We can keep prices at a low level”, says Niclas Nyrensten, product manager at Fritidsfabriken.

Launching both a clothes brand and an online shop simultaneously is not a small task. Nevertheless, Pernilla and Niclas managed to do it all by themselves, without outside financing. They started out with a capital of SEK 300,000kr. Almost all of it was spent on manufacturing in China and Vietnam, and marketing. The rest they have done themselves.

“From day one we have designed the clothes ourselves. I’m responsible for the design, Niclas for fit and function.”

“In addition to that, Niclas built our first online shop. We photographed and filmed the content for the website on our terrace, and we did the modelling ourselves”, Pernilla says.

“Sometimes I still model”, Niclas adds. “The first two years we worked from home and in the beginning we were also in charge of logistics. We printed out postage labels at home, packed the orders in Pernilla’s dad’s garage and loaded supermarket trolleys with packages.”

“It was only when the staff at the post office started hiding when we came in that we realised we needed to hire a logistics company. It helped, as we were able to scale up”, says Pernilla. 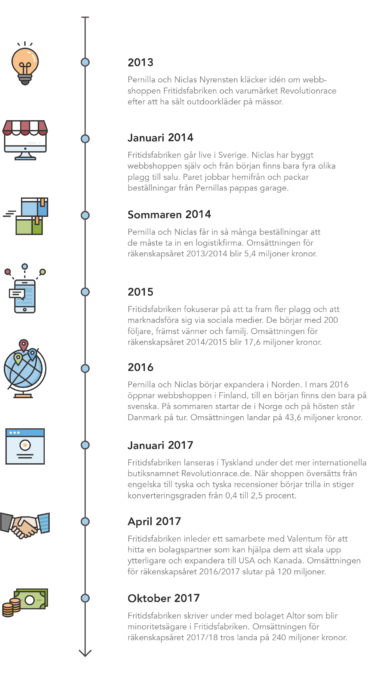 The marketing budget of Fritidsfabriken is mainly spent on social media, YouTube content and collaborations with influencers. Even if you have never shopped at Fritidsfabriken, you may well have seen RevolutionRace clothes on your Facebook feed.

Their well-fitting colourful outdoor trousers have become synonymous with the brand.

“People in the industry advised us to go easy on the colours, but we listened to the consumers instead. The same goes for our marketing. We regard our presence in social media as a dialogue between us and the customers, not advertising, and it has served us well. We started with perhaps 300 followers, mainly friends and family, now we have 205,000”, says Pernilla.

“We had 1,100 votes in the first hour, it was crazy. The colours autumn leaf, avocado and ocean teal where the winners, they’ll be out next season”, says Pernilla.

Investors are knocking on the door

By keeping costs at a low level, Fritidsfabriken has been able to retain a high profit margin. Even this year, when the turnover is expected to amount to SEK 240 million, the profit margin forecasted to be 35%. Fast growth and high profitability have attracted many investors.

“When the investors came knocking on the door, we felt it was the right time to bring in a new partner. At the end of last year, I was designer, CFO, CEO and logistician all at once, so I was a little weighed down. We needed a strong organisation with competent people who could introduce us to the right markets”, says Pernilla.

Fritidsfabriken were recommended to turn to Valentum for help in making a deal with potential partners. They also contacted other M&A advisory firms, but in the end they chose Valentum.

“The advisors at Valentum were both the best prepared, and the most likeable, out of everyone we met. They felt extremely competent.”

“We signed a contract in April and worked with them until we signed the deal with our new partner in October”, says Niclas.

After Valentum had put together an information memorandum, the company received valuations of well over SEK 500 million from different investors, much more than Pernilla and Niclas had expected.

“Without Valentum, we would never have reached a valuation of that level. I think their contribution added an additional 50%, if not double.”

“Their information memorandum also received much positive feedback and generated a lot of interest. We would never have managed to find 18 bidders on our own”, says Pernilla. Valentum presented all the bids to Pernilla and Niclas who were asked to choose four favourites. During three intense weeks the couple met with buyer representatives for dinners and presentations in Stockholm.

“For instance, we had very few monthly stock reports, but Valentum were very good at extracting the right figures from our system. On top of that, they were readily available, I have emailed them at one in the morning and received a reply. It gives an incredible feeling of reassurance since urgent situations can arise right ahead of a sale. The team at Valentum have hardly had time for their own lives these past months, they’ve been working 24/7”, says Niclas.

Turnover in billions next?

When the time had come to decide on a partner, Altor, who for instance helped Helly Hansen break into the U.S. market, was chosen. On the 18th of October, Fritidsfabriken signed with Altor after 13 hours of intense negotiations.

“Altor has a strong presence in the clothing market and the best industry advisors. In addition, they have a long-term plan which is important for us. We have big plans too. Together with Altor we want to launch RevolutionRace in the U.S. and Canada. We want to become a billion kronor company. If we keep doubling our turnover every year, it is feasible”, says Pernilla.

You helped Fritidsfabriken find a suitable partner. Could you tell us a little about the transaction?

What made this deal so special?

– We have never had more interest in a company before. We had investors from all over the world who were fascinated by the amazing company Pernilla and Niclas had built in only four years.

– Initially, we wanted to understand the reason behind the huge success of the company. Consequently, we started by interviewing Pernilla and Niclas and we also conducted an extensive customer survey. This laid the groundwork for the investment case which we presented to all the interested investors. We also put together an operating model based on all the factors that acted as value drivers for Fritidsfabriken. Together with Pernilla and Niclas we worked out a business plan for the coming years.

– During the preparatory work we also contacted and evaluated potential buyers. In total we evaluated more than 100 potential buyers, and from 18 of them we received bids. After Pernilla and Niclas had looked at them they chose four favourites that we evaluated more closely. After many meetings about the future and appraisals of feelings and chemistry, Pernilla and Niclas chose to go with Altor.

Why is Altor such a suitable partner for Fritidsfabriken?

– Pernilla and Niclas wanted a partner who could provide them both with the right value, and be of help in the coming expansion. More than just receiving advice from the board of directors, it was important for Fritidsfabriken that the new partner would help with recruitment, sourcing and logistics. With Altor, Pernilla and Niclas have the opportunity to create a dream team of advisors and board members who meet their needs. In short, Altor can help Fritidsfabriken become a billion kronor company.

What part of this deal are you most proud about?

– Leading a process through which Pernilla and Niclas could choose a partner without having to compromise the price or the terms. And being able to support Pernilla and Niclas to an extent that allowed them to focus on the on-going business, and not only on answering questions.

How far do you think this new constellation can take the company in five years?

– Fritidsfabriken has proved that they can be successful in ten European countries. I don’t see why the same concept wouldn’t work in the U.S. or even in Asia. I will be very surprised if Fritidsfabriken hasn’t reached a turnover of one billion kronor within five years—and they can probably achieve even the double of that.